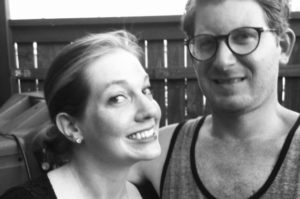 I began my Sunday not believing I would make it to the showcases later that evening due to sickness. But I decided to forgo traditional medicine in favor of whiskey so I laced up my converse like the true Fort Worth patriot I am and braced myself for the INTENSE HEAT. I started out at Magnolia Motor Lounge, where I saw a few bands including parts of Foxtrot Uniform and The Will Callers. I think it was during one of those sets when I updated my Facebook status saying, “It’s my destiny to marry and support a musician. Sad truth.” Guys with guitars are hot, it cannot be denied. Those bands were fun but I was really just killing time (with whiskey) to go to Lola’s and see Pinkish Black and Burning Hotels.

Now, bear with me. For the past several years, I lived in Baltimore so I was new to the Pinkish Black phenomenon. First, I didn’t realize they were metal. Second, I didn’t realize there were only two of them. All I knew prior to last night that friends have said they were rad. So I went to check out the hype. I was TOTALLY BLOWN AWAY. It amazed me that so much sound could come from two smallish looking dudes. I don’t know enough about metal to make a lot of those kinds of references, but their wall of sound reminded me a lot of former Fort Worth outfit, Valhalla who had a huge sound from only three smallish dudes. I thoroughly enjoyed the Pinkish Black set and complimented the singer profusely afterwards.

Next up were the Burning Hotels, whom I LOVE. The crowd was intense at that point and I was suitably tanked enough not to care. The Hotels played a great mix of old and new songs and I’m pretty sure everyone involved was having the best time ever. I’m sure I annoyed people around me by telling them that I was there, dancing on those Vivid nights! But regardless, THIS is the kind of shit I moved back to Fort Worth for. I always kind of joke around, calling the Weekly Awards the Fort Worth Grammys, but Fort Worth has a serious amount of talent that cannot be denied. Admittedly, I did not do as many of the venues and see as many of the bands as I would have liked. As I mentioned, I am sick so I was pretty laser focused on booze/self-medication but I had an awesome time. I hope to do more venue hopping next time around and catch more bands. But, can I just throw out the suggestion that we do this in the dead of winter next year? Can I get an amen?